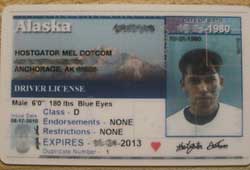 These days, companies just do anything to get on Digg’s front-page or to get their name viral. While a lot of these campaigns actually go viral like the Old Spice social media campaign which gathered over 6 million video impressions, some of these campaigns are plain stupid. Billy officially and legally changing his name to HostGator falls in the latter category.

Billy Gibby from Alaska has entered into Partnership with HostGator and hence changed his name to HostGator Dotcom on the papers. Last year he had his neck tattooed with “hostgator.com” to become the first man to be a walking billboard. Since then he has had over 20 such paid tattoos.

I wanted to be the first person to ever have their name legally changed to a Web site …. I can’t wait to see the look on people’s faces when they see my drivers license, or when they announce me into the ring for a fight with, ‘Please welcome Hostgator Dotcom’