Majority of mobile phone users own smartphones and while they offer such rich features one of the biggest drawbacks is the battery time. The battery drains out way too fast for us to actually enjoy the cellphone to its full potential. This particular application comes from Qualcomm and the Snapdragon BatteryGuru will help you get the most out of your battery and while it might not be enough, it will still be better than what you had before. 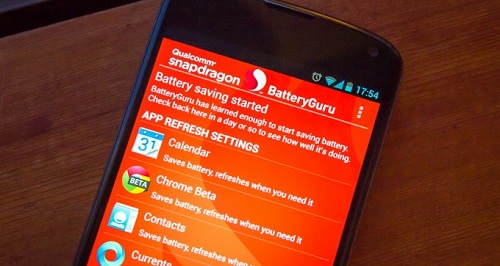 There are many applications on the Play Store that will allow you to save your battery by killing a few applications and processes running useless in the background. If you are not yet aware, many of the big time smartphones use processors made by Qualcomm and for the ones that use the SnapDragon, this application will certainly prove to be very useful. The application basically teaches itself and is continuously learning. The functionality of the application on every cellphone will be different based on how the user interacts with the phone and how one uses the features offered. The application will learn your general behavior with the cellphone which should generally take around 2 to 4 days and will notify you when it is ready to save your battery for you. It will keep running in the background without having to kill the functionality of the smartphone itself. The application is still in its beta phase but works quite promisingly at such a young age too. You might face some minor glitches, but nothing as big as to be concerned. There have been many positive reviews on the Google Plays store. The company has promised to extend the application to other smartphones as well.

If you are one of those users who has a snapdragon processor installed in the hardware, do give this application a shot and let us know what you think in the comments.